The Petrie Science and Engineering Building, which opened in 1968, houses the Departments of Physics and Astronomy, Earth and Space Science and Engineering and part of the Chemistry Department as well as the Centre for Research in Earth and Space Science (CRESS). This juxtaposition has provided fruitful opportunities for interdisciplinary research, with an area of about 17,000 square metres, as well as a number of specialized research facilities. These include 30 cm and 60 cm telescopes, CCD cameras, ultra high vacuum chambers, mass spectrometers, high bandwidth transient digitzers, lockin amplifiers, and a variety of lasers including YAG, excimer, argon ion and stabilized ring dye lasers. The Petrie building houses the CRESS Space Instrumentation Laboratory, in which students will develop and test prototypes of instruments for space flight, the GeoICT lab (Geospatial Information and Communication Technology Laboratory) and computing facilities associated with the project "A Community Approach to Multiscale Air Quality Modelling and Forecasting", all funded through the Canadian Foundation for Innovation.

A number of Atmospheric Science research projects are conducted in collaboration with the Environment Canada and groups from other universities, while Space Science projects such as Phoenix, OSIRIS on Odin, and SWIFT involve collaboration with local companies (MDA Space Missions, ConDev, Optech, EMS technologies etc) as well as the Canadian Space Agency, ESA, NASA and JPL.

The Petrie Science Building is connected to the Chemistry and Computer Science Building (CCB) which houses the Departments of Chemistry and Computer Science. Other York facilties include a professionally staffed glassblowing shop, a machine shop, an electronics shop, numerous desktop computers, VAX workstations, and IBM mainframe computers. The University library has a collection in excess of 1,000,000 volumes. Other facilities are available in the Centre for Research in Earth and Space Technology (CRESTech), a Centre of Excellence of the Province of Ontario, with headquarters on the York University campus. 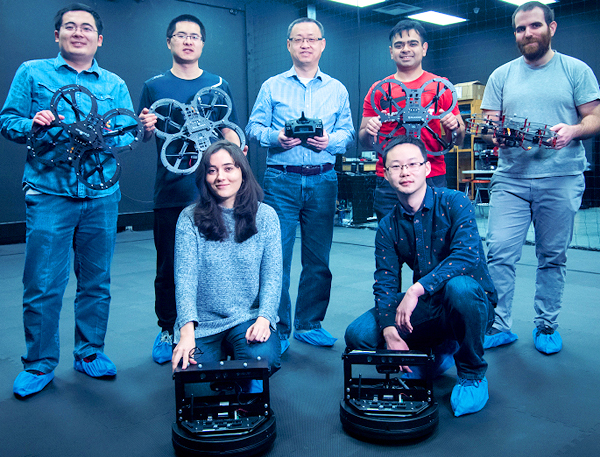 The York campus at Keele Street and Steeles Avenue in the northwestern suburbs of Metropolitan Toronto was opened in 1965 and became the principal seat of the University. This campus consists of some 600 acres providing all educational, residential and social facilities necessary for modern university life. A Faculty of Science was created in 1969 by separating the Departments of Biology, Chemistry and Physics (later to be renamed Physics and Astronomy) from the Faculty of Arts and Science. Later additions to the Faculty (which was renamed the Faculty of Pure and Applied Science in 1989) include the department of Earth and Atmospheric Science and the department of Computer Science. The departments of Mathematics, Psychology, Physical Education and Geography are all affiliated with the Faculty of Pure and Applied Science. In all, there are nine constituent faculties, and at present there are about 45,000 full time and part time students enrolled in the University. Of these, about ten percent are enrolled in graduate programs.

York University operates four graduate and married student apartment residences and a townhouse complex on the York campus containing bachelor, one bedroom and two bedroom units, completely furnished except for supplies. The University Housing Office maintains a register of available off campus housing for those preferring this type of accommodation. Although readily accessible to downtown Toronto by public transportation, the University includes a new shopping concourse (York Lanes) for the convenience of its community. Health services are also available in this new complex.

Recreational facilities are available to students on campus. There are several gymnasia, a swimming pool, an ice skating arena, squash and tennis courts. In addition, the Metropolitan Toronto Track and Field Centre and the National Tennis Centre are located on the grounds, and are available for use by the university community.

For entry into Fall 2022, our application is available October 15—January 15.